Climate modeling is something that is often attacked by those who are skeptical about projections of future changes in climate.  Today I saw three articles which I think do an excellent job of explaining some of the difficulties with climate modeling.

The first is a blog posting on our sister site, Animal Agriculture in a Changing Climate, on why climate models have not been able to capture the apparent pause in the warming temperature trend sine 1998 that has been noted by many climatologists.  Here is the direct link to the blog: https://animalagclimatechange.org/earth-hasnt-warmed-since-1998/

The second is an op ed published in the New York Times by a climate scientist and former astronaut on explaining climate models to politicians.  You can find that here.

The third article was published by MIT News and discusses how a mystery about understanding output from climate models was resolved.

Keep in mind that weather models and climate models have some similarities but are built to fundamentally different things.  Sort of like comparing a Ferrari to a Ford F-150 pickup.  Both have four wheels and an internal combustion engine, but are designed to do different things.  A Ferrari is designed to look good and go fast; a pickup is designed to be rugged and haul a lot.  I doubt that anyone would want to take a Ferrari out spreading manure (although it might be fun!).  In the same way, a weather model is designed to predict weather over short time scales and get the details like temperature and rainfall right, but they are terrible for long term prediction, an anything over a week is just guessing (contrary to some commercial forecasting firms’ claims).  A climate model is designed to get the long-term climate patterns right but are not so good at modeling things like hurricanes which are small in size and brief in time. 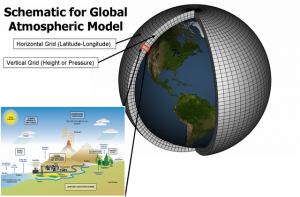