The latest 7-day QPF map shows that the heaviest rain will occur just off the East Coast this week, as the tropical low east of Florida moves to the northeast. There will still be the chance for intermittent and scattered thunderstorm rainfall over Alabama and Georgia this weekend before the drier and cooler air behind the incoming front filters in after the weekend rains. A spinning area of low pressure in the western Gulf may bring rain along the Gulf Coast and may feed into the frontal rainfall, hiking up the rain amounts and increasing the potential for thunderstorms. However, it is unlikely to developing into a tropical system because there is not a lot of vertical support for storm development.

The east coast of Florida is seeing some showers today as Investigation 98 slowly spins and deepens, but it is not clear if it will reach the status of a named storm or not at this point. It’s really no threat to land except for those showers right along the coast. A front that is moving south through our area will bring cooler temperatures to the Southeast, although it’s a little too early to say if that is the end of the 90s for some areas for this year. The front will also help fend off Investigation 98 from coming closer to land.

In the Atlantic, Tropical Depression 5 (update: TS Dorian as of 5 pm) may briefly develop into a named tropical storm or weak hurricane but is expected to move into unfavorable conditions and is not likely to become a significant storm. Early forecasts for Labor Day weekend indicate that the lingering front could potentially provide a source for the development of another weak tropical system that could bring rain to the Gulf Coast over the holiday weekend, but it is so far out that the forecast could easily change, so don’t make any changes to holiday plans at this point. 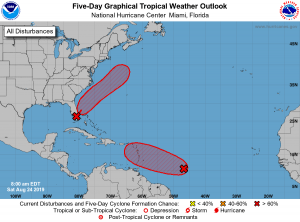