I sent out a message to UGA Extension earlier today discussing the current forecast for Major Hurricane Dorian and its potential impact on Georgia. You can read the full text below, but here is a brief synopsis. Dorian is slowing down and is now expected to hit the east central coast of Florida by Tuesday morning. After that it should make a slow turn to the north and head for Georgia later next week. The forecast is very uncertain due to weak steering currents, but my best guess is that north Georgia may not see much more than some gusty winds and perhaps some rain mid- to late week, although it could be completely dry since air sinks around the outside of hurricanes. The southern half of Georgia should see some rain by Tuesday but the northern half may be dry for the seven days. Of course, this could all change if Dorian’s path changes so keep watching trusted sources like the National Hurricane Center for the latest information.

The good news is that Hurricane Dorian has slowed down. That gives us more time to prepare, since now it is not likely to be affecting Georgia (except for coastal areas, which will get hit sooner) until the middle of next week or later. We also have more confidence in where the storm is likely to go, although nowhere in Georgia is entirely safe at this point. Keep in mind that forecasts will continue to change as we go through the weekend so don’t stop paying attention now.

The current projected path of the storm (as of 11 AM on Friday August 30) brings it onshore on the east coast of Florida by Tuesday morning. At that point it will slow more and will most likely turn to the right, following the Florida peninsula north. At that point it will probably bend towards the northeast and follow along the East Coast slowly through the week. It may still be affecting parts of the Southeast by next weekend, although at that point Georgians will likely be dealing with recovery rather than Dorian’s direct impacts.

If you are in northern Georgia, you may see only some gusty winds and scattered showers next week if the center of Dorian hugs the coast. Outside of hurricanes, sinking air often leads to sunny skies and little rain. The most likely time of Dorian’s passage through Georgia is Thursday September 5, and that would be the most likely time for gusty winds and showers in those areas, at least using today’s forecast.

If you are in southwest Georgia, your chance of seeing extreme impacts has been reduced, but you may still see gusty winds and rain squalls in mid-week, based on today’s forecast. If the path moves farther west, your chance of severe impacts will increase.

If you are in southeast Georgia, you are now the most likely to experience direct effects of Dorian. The first impacts will be at the coast, with strong onshore flow bringing high water levels in addition to the king tides that are occurring. Waves and beach erosion as well as over-washing of low roads are likely. As the storm approaches Georgia, heavy rains will occur ahead of the storm and winds will increase. At this point it is impossible to say how strong the winds will be because it depends on whether the center of the storm stays onshore or moves off the coast. With strong winds and saturated soils, trees will fall across roads and on power lines and buildings, so prepare for problems getting around and with power and cell service. Heavy rains from the slow-moving storm could bring rainfall of 10 inches or more to some areas near and to the right of the storm, and if it is really slow, 20 inches is not impossible. Roads, including interstates, could shut down. With ocean water very high and so much rain water, flooding could be severe and could last for quite a while in low-lying areas (think about Hurricane Florence last year). The area that is most likely to be impacted is the line of counties along the coast, but if Dorian comes in farther west than currently expected, that area will expand west from the coast. Put your vehicles, animals, hay and other valuable items on high ground, and if you have animals consider staging some feed around your property in case you can’t use vehicles to haul food.

As bad as it will be in Georgia, Florida is going to experience much worse conditions. A catastrophe is going to occur somewhere along the coast (and probably inland as well), we just don’t know exactly where it will be yet. A strong hurricane hitting the highly-developed east coast will cause huge losses in property. This storm may be nearly as strong as Michael was when it came ashore near Mexico Beach FL last year, and I am sure you remember the photos from that storm. Agriculture will also be affected, and entire groves of trees may be flattened like our pecan trees were last year. Please keep them in mind, because they will be dealing with both the immediate dangers from the storm this weekend as well as protracted clean-up once the storm is gone.

Make sure your preparations are done as soon as you can, just in case. Keep monitoring the National Hurricane Center and other trusted sources for up-to-date information in case the storm changes speed or direction. 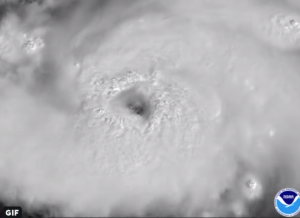