I observed significant Pierce’s disease and downy mildew yesterday, and both diseases are starting to show up in multiple northern Georgia locations now.  As I was looking at plants, I realized that one can confuse early downy mildew and Pierce’s disease if one is not careful.  If plants have confirmed Pierce’s disease, they should be destroyed as quickly as possible to prevent further spread of the bacterial pathogen that causes the disease.  However, you do not want to accidentally flag vines for destruction; downy mildew, as well as drought stress and some other issues, will initially resemble Pierce’s disease as well.  To further confuse the issue, it is also possible to have Pierce’s disease plants that are also presenting symptoms and signs of downy mildew.  Pierce’s disease normally presents in clusters of plants, as opposed to whole plantings, so that is initially helpful in identifying the disease (see the fact sheet “Pierce’s Disease of Grape: Identification and Management” for additional help in identifying this disease).  The downy mildew organism can generally be observed as a downy, felt-like sporulation on the underside of infected leaves, so that is the best confirmation that leaves are infected with downy mildew, as opposed to leaf scorch symptoms of Pierce’s disease.  If you are confused on symptoms and need confirmation of either pathogen, contact your local county agent.  Nathan Eason and Clark McAllister can confirm the presence of Pierce’s disease through test kits that are available in their offices, and other county agents can help with visual assessments as well.   Please do not hesitate to use these resources as we finish up the harvest season. 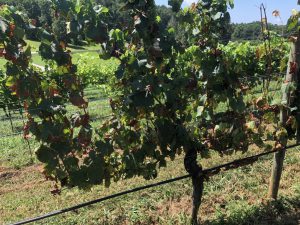 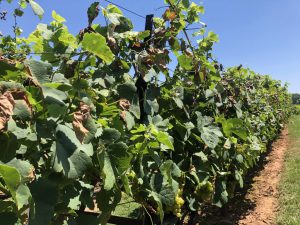 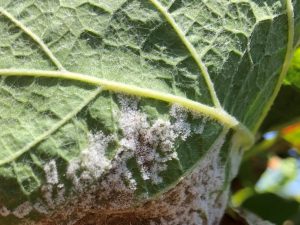 Downy mildew on the underside of leaves showing scorch-like symptoms.