I have another post that may seem scary, but there is no need for panic…yet. As many of you have probably already heard, the spotted lanternfly (SLF) is the latest non-native species to invade the U.S. This insect is not a fly, but is actually a large, brightly colored planthopper, about a half-inch long. The spotted lanternfly was first found in Pennsylvania in 2014 and has since spread to New York, New Jersey, Delaware, and Virginia. Thankfully, SLF has not been detected in GA, but it is an insect for which we need to be on the lookout. 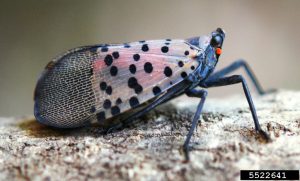 The SLF has one generation per year, overwintering as eggs, which hatch in the spring. Nymphs feed and go through several developmental stages, developing a bright red color just before becoming adults. Adults are present starting in mid-summer and spend the rest of the summer feeding; they mate and lay eggs in the fall.  Unfortunately, they lay their egg masses on logs, nursery stock, rocks, cars, etc…which has aided in their spread across the mid-Atlantic U.S. Thankfully, though, SLF are not great flyers, which hinders their invasion of other regions. 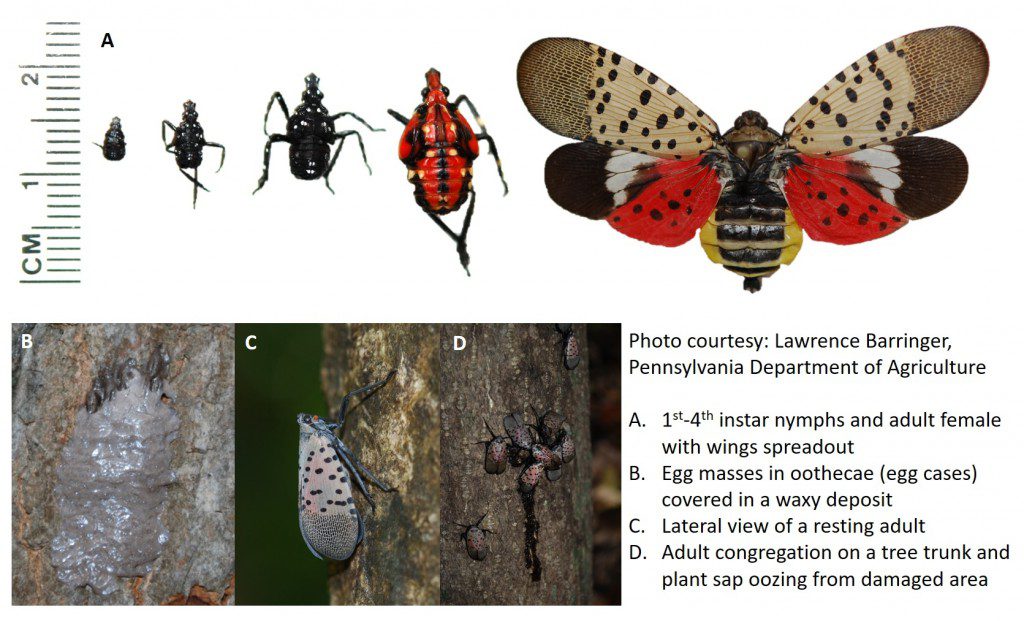 Similar to sharpshooters, SLF are piercing-sucking herbivores that feed on the phloem and xylem of plant tissue.   Unlike sharpshooters, though, SLF tend to aggregate in large numbers on their host plants. The mass feeding can can considerably impact plant health and reduce vigor. Additionally, their waste (honeydew), like aphids and mealy bugs, is high in sugar, which can encourage sooty mold growth. The honeydew can also attract bees, ants, and wasps.

SLF is has a wide host range with over 70 confirmed hosts, but they seem to prefer feeding on grape vines and fruit trees (e.g., apple and peach). Their preferred host, though, is the invasive tree tree of heaven (Ailanthus altissima). In regions where SLF are found, they are often first found on tee of heaven. Thus, these trees can be used as a monitoring tool for initial invasions from SLF. 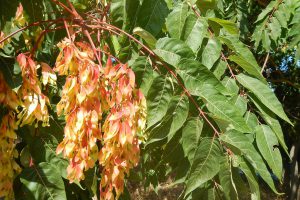 Since spotted lanternfly is not in GA yet, I recommend everyone be aware of this easy pest, but in the meantime, keep calm and carry on.  While I plan on monitoring for this insect using a variety of methods, including sentinel tree of heaven plants, we need to work together to keep an eye out for this insect.

More information on the spotted lanternfly can be found on this Clemson Extension fact sheet: 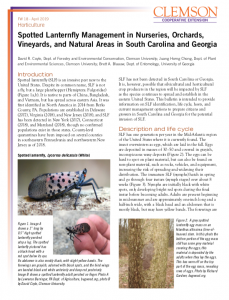