The Japanese Beetles are Back in Town

The time is upon us once again. Japanese beetles are showing up in vineyards around the state. They are only just beginning to emerge, so their numbers will increase dramatically over the next few weeks. In large enough numbers, Japanese beetles can be a severe pest of grapes during the summer, feeding mainly on foliage and (thankfully) rarely on the berries.

More problematic is Japanese beetles feeding on new plantings. Older, established vines can withstand some feeding damage, but young vines can quickly become defoliated from these beetles, so special attention should be given to newly planted vineyards. 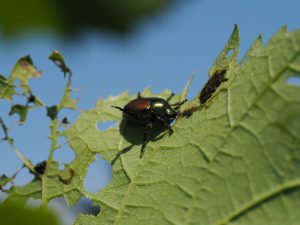 Japanese beetles are most active on warm, sunny days and tend to congregate in groups on vines to feed and mate near the top of the canopy. The adult beetles feed on the soft leaf tissue between veins, which often results in a skeletonized appearance. Currently there are no thresholds for Japanese beetle leaf damage, so growers should rely on their judgment and experience to determine whether beetle abundance and/or injury warrants chemical control.

See Table 1 below for a list of some of the commonly recommended chemicals for Japanese beetle control. Abundance is often highest at vineyard borders, so focused management for these beetles may be an option to minimize cost. Note that the homeowner version of Sevin is no longer Carbaryl, but rather zeta-cypermethrin. While zeta-cypermethrin is effective against Japanese beetles, you may notice differences in control with the change in chemistry.

Additionally, Japanese beetles appear to show preference for grape varieties with smooth, thin leaves which are unfortunately characteristic of many wine grape varieties (e.g., Chardonnay, Traminette, and Vidal Blanc). Focus for monitoring and management should be given to young vineyards and areas with a history of Japanese beetle injury. Note that the standard monitoring traps for Japanese beetles are highly efficient at attracting beetles to your vineyard, but are terrible at trapping them. Thus, these traps are NOT recommended.

Management recommendations can be found at smallfruits.org:

Note: Always check the chemical label for directions and rates.