I have had a few questions relative downy mildew management, especially with the floods of the last week. Relative Abound fungicide, I would not trust any of the strobilurins alone for downy mildew management. If using Abound, I would use the high rate, and I would add some Captan to the mix.  When using any strobilurin-containing products such as Pristine, Abound, etc., I would add an additional downy mildew active material – just to be on the safe side. These strobilurin fungicides have been out there for a while, and I just have a hunch that resistance may be an issue in locations where they have been utilized over the years.  With that said, it is definitely time to bring out the big guns relative fungicides.  See below for a comparison of downy mildew development at the Blairsville research station (provided by Cheng-Fang Hong in the Plant Pathology Department).

The PHI is getting pretty close on Ridomil MZ, and the PHI has been passed for some varieties and sites, so be aware when using this material. With rainy conditions, I would start incorporating some of the other materials in combination with mancozeb (if still allowed due to PHI) or Captan. Revus, Presideo (high rate), and Zampro would work well as systemics, and they really have great downy mildew activity. One would have to also make sure that all other diseases are covered with tank mixes, so I am really only addressing downy mildew with this message. Prophyt + Captan is OK as well for downy mildew, so I would rotate in these various materials for the remainder of the season. We are now a little cooler, and rainfall has definitely been adequate for downy mildew development.  I am fearful.  This could be a very difficult production year for any who let their downy mildew guard down. 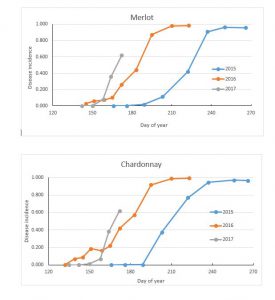