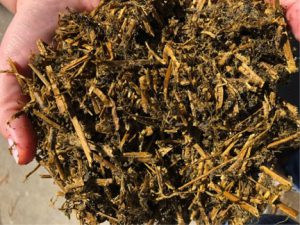 Question: Since baleage is becoming more readily available, I’m wondering what your thoughts are on feeding it to horses? Should horses be vaccinated against botulism if feeding baleage? Is warm weather feeding of baleage going to result in mold formation? Additionally, I know of some horses that eat haylage and corn silage. Is the lower pH in haylage and corn silage enough to reduce the botulism risk?

Response: Baleage (baled silage), haylage and silage are gaining popularity as farmers can harvest it more quickly (e.g. less drying time) to avoid adverse weather. Baleage is mostly large round or square bales baled at 45 to 60% moisture and then wrapped in plastic to allow fermentation. Baleage is usually harvested as long-stemmed forage, but some specialized balers have pre-cutting systems that preprocess the forage into shorter lengths. In comparison, traditional dried hay is usually baled at 15% or less moisture. Haylage is a broader forage term referring to forage that is harvested at 40 to 60% moisture, so baleage and haylage are terms often used interchangeably. Silage is a term that has a broader definition including any forage that is harvested at a slightly higher moisture than haylage, but it is most commonly used in the context of corn silage. Both haylage and silage tend to be chopped, and are usually stored in some sort of structure (e.g. bunker silo, bag, or upright silo).

Although baleage, haylage and silage can be fed to horses, it should be done with caution. Baleage, haylage and silage can be very nutrient dense and contains microbes and potential probiotics that can affect the gastrointestinal microbe population. A slow transition (e.g., over the course of 10 to 14 days) to this type of forage reduces the risks and incidences of colic, founder and other digestive upset. Additionally, mold formation can be a concern if not preserved correctly, or if the plastic wrap on the baleage is punctured and exposed for long periods of time. Additionally, once the baleage is opened, it should be consumed quickly (e.g. within 24 to 48 hours) or there is a chance of mold formation due to the high harvest moisture. The warmer the temperatures (e.g., summer months), the more quickly baleage should be consumed.

Mold growth in baleage largely poses a different risk than the mold growth in hay. In hay, a major risk is from the spores that certain species of molds produce and the impact that those spores have on respiratory distress. However, molds that are commonly produced in and on baleage are less likely to produce spores and so are of minimal risk of respiratory distress. However, some molds under certain conditions can produce mycotoxins that might be toxic to horses and other livestock. Visible white mold growth on the exterior of the bale is unlikely to cause an issue. However, molds that are green, yellow, orange, or red are species that can produce mycotoxins that are highly toxic. Fortunately, these are very rare and usually avoidable when those who feed the baleage are trained to be attentive to those colors and the soured and putrid smells that often accompany such bales.

A concern of any preserved forage is the presence of Clostridium botulinum, as very small amounts of the botulism toxin they produce can cause death. However, botulin production in well-preserved silage or haylage is highly unlikely, as pH is too low for C. botulinum to survive and grow. A killed vaccine (toxoid) directed against C. botulinum type B only is licensed for use in horses in the U.S. The vaccine is recommended for horses at increased risk of developing botulism due to residence in (or travel to) endemic regions (C. botulinum is also found in soil) and horses fed high-risk forages (e.g high moisture forage). Horse owners should consult their veterinarian to discuss what vaccinations are necessary and appropriate for their horses.

Much of the research focused on feeding silage and haylage to horses has been done in Europe, where these forage forms are commonly fed. In one research project, horses preferred grass silage over grass hay and grass haylage. In a separate research trial, feeding silage to Standardbred horses in race training did not affect fecal water content, but apparent digestibility was higher when fed a silage (55% moisture) diet compared to a hay (18% moisture) diet. The silage diet did not adversely affect the response to intensive exercise compared with haylage (32% moisture). Finally, in a separate research project where horses were fed hay and silage, no differences between the diets were found in the concentration of the total volatile fatty acids, the apparent digestibility of dry matter, organic matter, and fiber and in vitro neutral detergent fiber disappearance throughout the digestive tract.

While horses can be fed baleage, silage and haylage, we recommend horses be fed primarily dried hay. Transition to these feeds (or any new feedstuff) should be done gradually. Just like evaluating dried hay for mold and dust, baleage, silage and haylage should also be evaluated for mold. Moldy forage should never be fed to horses. Risks associated with C. botulinum is very low if moderately high moisture forages are preserved properly. Additionally, horse owners should discuss the pros and cons of vaccinating horses against C. botulinum with their veterinarian.