Peanuts are going in the ground and a rain will be needed soon in the Colquitt County area.  I have received a question or two about watering peanuts.  Wesley Porter, UGA Irrigation Specialist, says “However, early May has brought some very good weather for both planting and emergence.  We have had adequate rainfall and enough dry periods to get planting completed.  Ideally we will continue to keep getting some ample rainfall and ideal weather throughout the month of May. If you have not had the opportunity to get your peanuts in the ground the first two weeks of May have produced optimum conditions. Below is the water use curve for peanuts.  This update we are going to focus on the first few weeks after planting up to the first month of planting, based on when the peanuts were planted, i.e. early April or late April.If the peanuts were planted in early April we are moving into 4-8 weeks after planting or requiring anywhere from 0.3 to 0.9 inches per week.  If the peanuts were planted in late April or early May, like most crops, peanuts do not require much water early, so do not over water them after planting.  During week 1 they require only 0.07 inches of water!  This is probably already available in the soil unless we’ve had a very dry spell just before planting.  This range goes from 0.07 up to 0.3 inches across the four weeks.  Still very little water required early, but we start requiring significant amounts around weeks 7 to 10.  Overwatering can hurt just as much as under-watering.  Remember this requirement is IRRIGATION and RAINFALL!  Irrigation may not even be required in the first few weeks!” 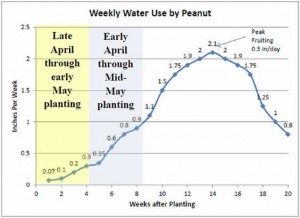