Drought decreases in spite of dry conditions in November 2019

November 2019 was 1-3 degrees F colder than normal, a stark contrast to the very warm October. Most areas of the state were drier than normal, but some coastal areas received heavy rain in mid-November, resulting in wetter than normal conditions there. In spite of the dry conditions across most of the state, drought coverage decreased during the month as impacts were limited following the end of the growing season in much of the state. 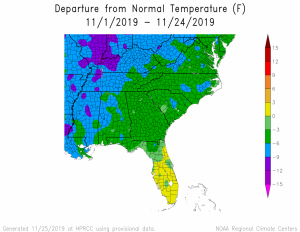 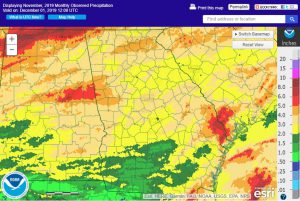 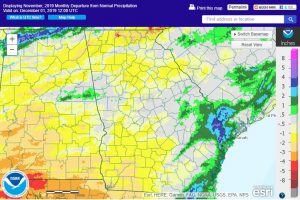 The highest daily rainfall total from CoCoRaHS observers was 6.30 inches one miles north of Pooler in Chatham County on November 16, followed by 6.02 inches measured east of Springfield in Effingham County on the same date.  For the month, these two observers also had the highest totals, with 8.70 inches from the Pooler observer and 7.59 inches from the Springfield observer. No snow was reported in November.

Only one severe weather report was listed in November with a single damaging wind report on the last day of the month.

In spite of dry conditions across most of the state, severe drought decreased from 12.6 percent of the state covered to just 1.7 percent. Over 63 percent of Georgia is now completely drought-free. This is due to the combination of some heavier rain events which helped moisten the soil and the end of the growing season, which reduced water demands by many plants as they moved into winter dormancy.

Harvest for most crops is nearing completion and the increase in soil moisture allowed farmers to plant winter grains and forage in many areas. Some areas are still suffering from a lack of moisture and many livestock producers are continuing to feed hay due to the drought earlier this year.

The outlook for December and for the December through February period leans towards warmer than normal temperatures but equal chances for near, above and near normal precipitation. Neutral conditions are expected to continue in the Eastern Pacific Ocean through the next few months.

For more information please see the “Climate and Agriculture” blog at https://site.extension.uga.edu/climate.  You can also visit the University of Georgia weather network web page at http://www.georgiaweather.net. Please feel free to email your weather and climate impacts on agriculture to share on the blog to pknox@uga.edu.