Thirty years after Hugo, building along the coast is booming

This week marks the 30th anniversary of the landfall of Hurricane Hugo on the South Carolina coast. Hugo caused tremendous damage along the coast, wiping out a lot of property as well as causing tremendous damage inland from the strong winds. I remember flying into Charlotte NC the day after Hugo and seeing many trees down as well as rivers running red from all the erosion of the clay soils. But it appears that lessons were not learned from the storm, because now the coastline is more built up than ever, and these new buildings are starting to see problems from coastal erosion due to storms like Dorian as well as rising sea levels. It’s only a matter of time before the houses wash away, but a lot of coastal residents don’t seem to understand the problems they are facing. You can read more about it at The State here. 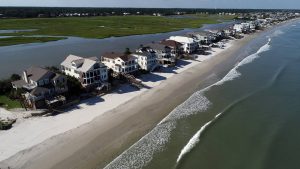