Temperatures across most of Georgia in August 2019 were mostly warmer than normal. Precipitation varied quite a bit across the region, with some areas receiving rainfall 200 percent of normal while others received less than 50 percent of normal. 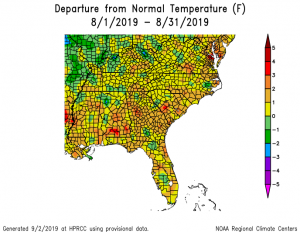 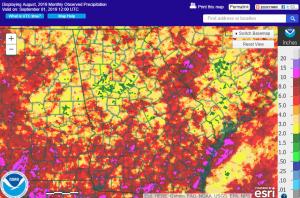 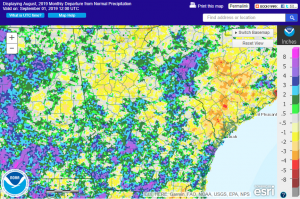 Brunswick set a daily record high precipitation value on August 17 when they received 1.91 inches, breaking the old record of 1.43 inches set in 1989.

Drought conditions ebbed and flowed during August. The highest amount of area covered by moderate drought came in mid-month with little rain, then dropped briefly before expanding again at the end of the month. No severe drought was observed in August.

The dry conditions helped farmers with good weather for harvesting except where the ground was too hard to invert peanuts. Hot and humid conditions caused problems for field workers in mid-month. Dryland crops were generally not doing well and yields in those areas were expected to be down, but irrigated crops were doing well. Some farmers were starting to feed hay to cattle by the end of the month due to lack of healthy forage.

The outlook for September 2019 and for the September through November period shows that the temperatures for the next three months are expected to continue to be warmer than normal across the state. Precipitation shows no trend towards wetter or drier conditions for the 3-month period except along the East Coast, where the impacts of Hurricane Dorian early in September were factored into the forecast.