Some pretty significant changes in the path of Hurricane Dorian over the last day have increased the risk of significant impacts to Georgia this weekend and next week. Dorian’s path has been farther east than originally forecast, which means that its circulation has avoided the mountainous terrain of the Dominican Republic and Puerto Rico. That means it was less disrupted than expected, and now is forecast to approach the east coast of Florida as a potentially major hurricane by Monday. The forecast cone includes all of the Georgia coast, however, and there are still likely to be significant changes to the forecast path. The more eastward path has also added time before the projected landfall, so that gives us a little extra time to prepare. There is also a slight chance the storm will recurve to the northeast before it hits the coast—in that case, breathe a sigh of relief and think of this as preparation for the next storm.

If you are in southeastern Georgia, you should be prepared for tropical storm force winds to hit as early as Sunday morning. That means you need to remove anything from outdoors that could become a flying projectile by Saturday night. We should have mostly dry weather through Saturday, but after that the chances for rain go up as onshore flow brings a lot of moisture to the area. Along the coast, onshore flow coupled with the already higher than normal tides will increase the chances of flooding, and that will only be made worse by the tropical rainfall. Spiral bands ahead of the storm could produce brief tornadoes in isolated thunderstorm cells. Power outages are likely due to the combination of wet soil and strong winds blowing trees over.

If you are in southwestern Georgia, do not let your guard down. A number of computer models indicate that the storm may cross the Florida peninsula and enter the Gulf of Mexico, where sea surface temperatures are above normal. A recurve to the north into Georgia is a possibility, and even if the storm weakens as you might expect, heavy rain and brief tornadoes could occur in that situation. The timing would be starting early next week due to the extra time it would take for Dorian to cross Florida, so you still have time to watch and prepare.

If you are in central and northern Georgia, you have more time to watch the storm development, but you should also prepare for potential tropical storm force winds and heavy rain at times. The timing of the impacts would most likely be Tuesday through Thursday based on today’s forecast, but that could change depending on where Dorian actually goes and how fast it is moving. In any event with potentially heavy flooding, you should move equipment and livestock out of low-lying areas in advance of the storm and make sure you have fuel and the capacity to provide power if you need it for milking, drying of crops, etc. The combination of strong winds and rainfall means that falling trees are more likely and will impact power availability.

The holiday weekend means that there will be extra people on the road and in hotels, so don’t wait until the last minute to get gasoline, cash, and whatever else you might need in case of power outages and road closures.

I am also retweeting at @SE_AgClimate and posting on Facebook at SEAgClimate as well as posting some additional information on my blog at https://site.extension.uga.edu/climate. However, make sure you are getting current information from reliable sources like the National Hurricane Center, National Weather Service, and your local emergency managers for expected impacts in your area. You can also get more information about preparing for the storm at https://www.ready.gov/hurricanes.

Finally, please keep our friends in Puerto Rico in your thoughts as the eastern side of the island is currently experiencing strong winds and heavy rain from the storm. Many areas of PR have not yet recovered from Hurricane Maria and this will place extra burdens on them. 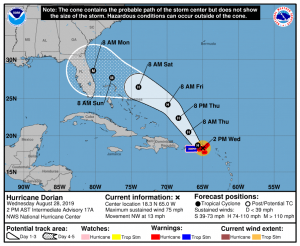