A few things I am watching with Dorian

If you are feeling whiplash from all the media attention on Hurricane Dorian, you are not alone. Any potential for a big storm is going to bring out a lot of media attention, good and bad, and this certainly has the potential to be very bad. Here are a few of my thoughts while looking at all the content online.

1. I love to look at spaghetti maps showing all the possible solutions for what “could be” the path of the storm. Of course you have to realize that most of them will never happen, but if you are someone who needs to know how bad it could be, the spaghetti models do tell you the envelope of possibilities. The important thing is not to focus on any one track but to look at both how they are scattered over time and space and how much they change from one set of runs to the next. Confidence grows when most of the models agree. Low confidence at the end of 5 days shows up as the wide “bulb” on the end of the cone from the National Hurricane Center (see below), since at that point the center of Dorian could be almost anywhere in that circle.

2. The timing of the storm hitting Florida (if it does) is going to be key to some of the impacts that will be seen. The slower the storm moves, the less certain we are about where it is going, because it is more subject to a variety of pushes from the atmospheric circulation and we don’t know which ones will be strongest. Another issue with slow storms is that the bring the wind and rain over the same area for a long time. I am sure the wind is bad enough, but for me the rain is worse because of the damage it can do on the ground. Climatologists use a rule of thumb that says the amount of rain in inches from a tropical storm or hurricane that falls at any one place is roughly equal to 100 divided by the forward speed of the storm. So for a storm that is moving at 20 miles per hour, you can expect rainfall at any one place to be about 5 inches. If the storm is moving at 5 mph, then you can expect rain of 20 inches at one place. Note that some of the recent big flooders like Florence and Harvey both had extremely low rates of forward speed, as did Tropical Storm Alberto in southern Georgia back in 1994, which set the state record for a 24-hour rain event at about 21 inches. And of course the combination of wind and wet soil will push a lot of trees over, causing problems with power and roads, potentially for a long time if they are down over a wide area as I think may happen in central Florida.

3. Also, the slower the storm goes, the longer the impacts will be for somebody. If it slows way down, it may still be affecting areas along the East Coast for a week after landfall. So landfall (again, if it happens) is really just the beginning of the story, and you need to look past that to see what impacts will happen in your area, even if they are the weekend after Labor Day. It’s just too early to know what is really going to happen, and it depends a lot on where you are.

4. Any time a storm hits the Florida peninsula, evacuations cause a lot of problems with traffic. Hurricane Matthew in 2017 followed a path right along the East Coast, driving waves of evacuees ahead of it filling up the interstates and using a lot of gas. Other hurricanes in the past have done the same thing (I am thinking Floyd in 1979). Hurricane Irma’s path right up the peninsula in 2017 made people not sure where to go to evacuate, because the forecast cone changed over time and where people thought they were safe early in the storm’s lifetime became the worst place to be later. It’s bad enough on a regular weekend, but this is Labor Day, and mixed in with the evacuees are a lot of people doing their usual Labor Day last fling of summer (some of whom have no clue there is a hurricane at all if they managed to turn off their cell phone on vacation). So hotels are full, gas stations and ATM machines are emptying quickly, and everyone is in a hurry to get somewhere. This time at least some of the models are bringing Dorian right up the Florida peninsula after it makes landfall, so you are sure to see some of that this weekend too. Don’t be caught unprepared.

5. Impacts from hurricanes can happen a long way outside the cone. When Hurricane Sandy was hitting New Jersey, the wind gusts in Georgia were strong enough to drop tree branches, injuring a child at daycare and causing some power issues. That was a bigger storm than Dorian, and while I don’t think the wind field of Dorian is going to be anywhere near that large, it is still going to cause problems far away from the center. In particular, I think the Atlantic coast is going to be affected for quite a while by onshore flow around the storm. That could bring extra high sea levels to an area that already floods regularly, on top of king tides which are occurring this week which are also making water levels higher than usual. If the path follows up the Florida peninsula and then moves to the northeast paralleling the East Coast, it could bring continuous onshore flow to the coast for days, adding to the problems there. Erosion could be significant. The onshore flow will also bring in plenty of moisture to form rain, and that can happen far ahead of the storm, so just because the storm is not near you it does not mean that you are not going to see impacts. One of the worst scenarios I saw today (from a single model, so hopefully not too likely to happen) was for the storm to amble slowly up the East Coast, dropping up to 20 inches of rain on the coastal plain of Georgia and South Carolina over the next ten days.

6. Finally for now, there are going to be people who do not feel the worst effects of the storm and will call it a “busted” forecast. Most hurricanes could be worse at a particular location if they moved more slowly, had slightly stronger winds, or moved 50 miles closer to you. That’s a very hard forecast for meteorologists to make, even though they do their best. There are just too many factors at play (which is one reason I like studying the weather). If the forecast is less bad than expected for you, thank your lucky stars that it was not worse than it was and help your neighbors who are in worse shape than you are. The next storm might not be so kind. 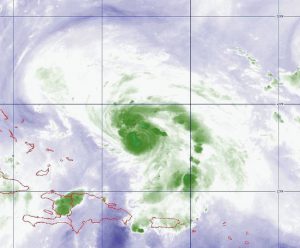 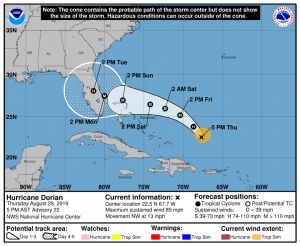