Lee Shearer of the Athens Banner-Herald has an interesting story about a new island that was created along the Georgia coast by storm surge associated with Hurricane Irma last September. According to the story, the new island formed when the storm shifted the channel of Blackbeard Creek and blew out part of a narrow finger of land that extended from Blackbeard Island south toward Sapelo Island, as explained by Marguerite Madden of the UGA Center for Geospatial Studies. Madden and Tommy Jordan took pictures of the new island near Sapelo Island using a drone. You can read the article here. 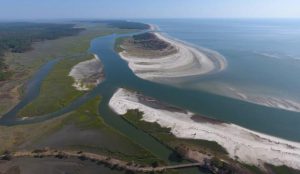