While the Atlantic has been relatively inactive as far as tropical storms go this year (although they are still ahead of normal in named storms), the Pacific Ocean has been hopping.  Weather Underground posted a story describing the eight storms that occurred at the same time across the Northern Pacific Ocean at https://www.wunderground.com/news/eight-tropical-cyclones-pacific-july2017. You can see five of the circulations on the Earth wind map available from https://earth.nullschool.net/  (and maybe six if you see the weak one on the far left near the Philippines–easier to see in the moving version at the website).

Why so many this year? The article discusses it but another cause may also be the widespread above-normal temperatures in sea surface temperature, which you can view at https://cci-reanalyzer.org/wx/DailySummary/#SST_anom. 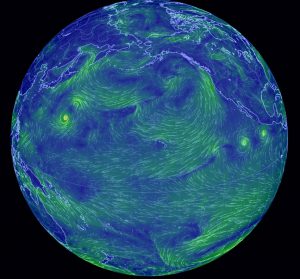 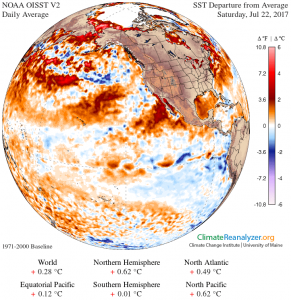