The current outbreak of cold air that has moved into the Southeast from Canada is blowing strongly outside my window tonight, dropping temperatures quickly to near-freezing levels.  This outbreak is so strong that it has produced a “Tehuantepecer” or flow across Mexico from the Gulf of Mexico into the Pacific Ocean basin.  You can read about them at Wikipedia here.  The flow is easy to see in the streamline analysis–I have drawn a red arrow to designate the flow across Mexico.  In addition, in the false-color MODIS image on the bottom, you can see river-effect cloud and snow bands trailing off the Missouri River in South Dakota, where water temperatures are still 40-50 F while the air temperature is near zero.  For a visible animated satellite picture, go here. 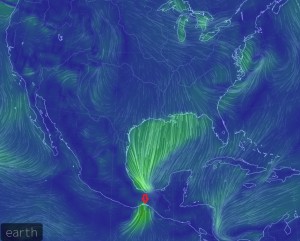 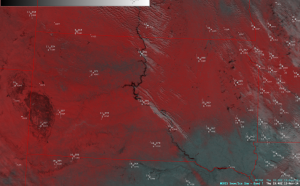 5 thoughts on “Impacts of the strong Arctic air flow”