Feast or famine for August rainfall in Georgia

Rainfall across Georgia was highly variable in August.  Most areas of the state received well below normal rainfall for the month, leading to expansion of dry conditions and the appearance of severe drought in southern Georgia by the end of the month.  Wet conditions were confined to the Atlanta metro area and regions to the northwest and a small part of northern Pierce County.  Temperatures were near normal across the state. 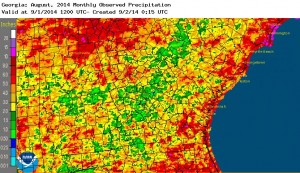 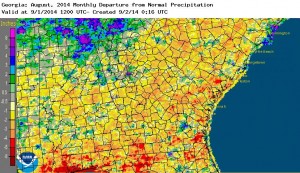 The highest single-day rainfall from CoCoRaHS stations was 6.02 inches east of Savannah in Chatham County on August 3.  Another nearby observer received 5.50 inches on the same date.  An observer ENE of Helen in Habersham County received 5.76 inches on August 10.  The highest monthly total rainfalls were 11.75 inches and 11.64 inches from the same two Savannah observers, followed by 11.05 inches measured on Skidaway Island.

Severe weather was observed somewhere in Georgia on twelve days out of the month.  One tornado was reported during the month, an EF-1 tornado observer on August 20 in Murray and Gilmer Counties near Pleasant Hill.  A report on this tornado can be found at https://www.srh.noaa.gov/ffc/?n=20140820_tornado.

Due to the dry conditions across most of the state, drought expanded in the southwest and south central regions.  By the end of the month, severe drought covered eight percent of the state and over 50 percent was covered by abnormally dry or worse conditions.  Low dewpoint temperatures and low humidity helped reduce foliar diseases on some crops.  A CoCoRaHS observer in central Georgia noted that leaves were falling like it was autumn and that all chance for an additional cutting of hay was gone.  He is down 80 bales compared to last year.  A brush fire near Macon on August 27 was expected to continue to smolder until the next significant rain event.

These monthly climate summaries, along with other information on climate and agriculture in Georgia and the Southeast, is posted on the “Climate and Agriculture” blog at https://site.extension.uga.edu/climate/ as well as other sites.  Please feel free to email your weather and climate impacts on agriculture to share on the blog to .