Have you enjoyed the cool and pretty weather we’ve been having this week?  A number of stations even set record low temperatures this morning, including Atlanta, Columbus and Macon.  Athens tied their record low of 60F today–the old record was set back in 1925.  It even made it down into the 40s in the northeast mountains at a  few locations.  This map from Georgiaweather.net this morning shows the early morning temperatures across the state. 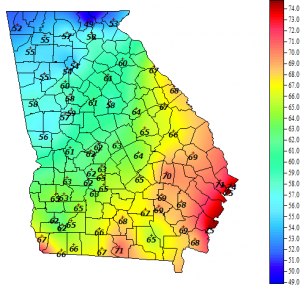 But the weather should be returning to normal over the next few days as warmer and moister air moves into the state both from the Atlantic Ocean to our east and in a storm system moving in from the west.  Clouds and scattered showers will be on the rise tomorrow and through the next few days.  The clouds should keep daytime temperatures relatively cool and storms will be  hit or miss but will mainly occur in the afternoons and early evenings.