Is a super-El Nino coming? An analysis by the Florida State Climatologist

David Zierden, the Florida State Climatologist, provides some analysis on the potential developing El Nino and what to expect:

In recent weeks sea surface temperatures along the equator in the Pacific Ocean have warmed significantly in response to a strong Kelvin wave triggered by westerly winds over the western Pacific earlier in the year.

In spite of the fact that Nino 3.4 has reached the 0.5 C threshold, however, NOAA held off in declaring that “El Niño conditions” were here in their monthly advisory issued yesterday.

But, I put a lot of stock in Klaus Wolter’s Multivariate ENSO index (MEI) and his insight.  His latest numbers and discussion that were also issued yesterday showed a dramatic rise in the MEI to 0.93 sigmas and he states we are in high/moderate rankings as far historic El Ninos go.

However, the MEI is based on two-month averages of the oceanic and atmospheric variables that go into the index and is drawing on observations from April and May for the latest update.  The atmospheric variables were fairly strong in favor of El Nino in April, but much less so in the month of May.

The problem is that at the current time the atmosphere has not coupled with the sea surface temperatures like during a full-blown El Nino and that coupling is needed for this event to continue to grow during the late summer/fall.

Sea level pressure differences (as usually tracked by the SOI) have returned to near zero after being strongly negative in early April.  Cloudiness near the dateline has also returned to normal as measured by satellite outgoing longwave radiation.  Most importantly, we have not had any significant westerly wind anomalies since early April and these winds are the real drivers of SST changes. I have attached a time/longitude section of 850mb winds along the equator for reference. 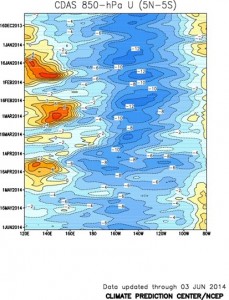 In 1997, by June the atmosphere had strongly coupled with the ocean and the warm SST’s were now driving strong westerly winds across most of the equatorial basin.  It’s pretty clear now that we will not have a repeat of 1997/1998.

Bottom line – the Kelvin wave that just finished crossing the Pacific and subsurface temperatures are probably strong enough to ensure at least a weak El Nino, but the atmosphere will need to get its act in gear for this event to grow stronger.