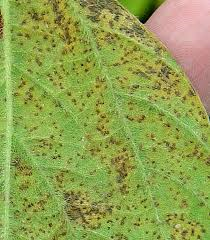 Dr. Bob Kemerait, UGA Extension Plant Pathologist “Any soybeans that have reached full seed/R6 growth stages are “safe”.  Younger beans (especially those in early pod development stages in the southern part of the state) are still vulnerable to the disease.  With recent rainfall patterns and cooler temperatures, the disease could begin to spread more quickly.”