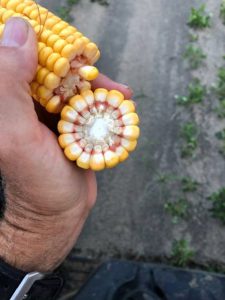 Grains are growing well where we have good rain or irrigation. Corn harvest will begin in a couple of weeks. Lots of corn denting now.  Here’s an ear at ¼ milkline and notice not much dent. This is good as the kernel is so plumped the dent doesn’t go deep. When the kernel first dents the process starts where the moisture content is lower and the starch content is increasing in the kernel. The milkline will move down the kernel until ¾ milkline and seem to hesitate there a bit before black layer, a week or so. Watering during this R5  growth phase is still important even though not as much is needed. High test weights are often a result of keeping corn wet during this timeframe from dent to blacklayer which can be 3 and a half weeks or so.  A good way to show this is to grab a couple of ears at first dent and throw them on your truck dash for a few hot days. Then take a close look at the ear and you can see and feel the kernels are loose and have gaps between them. This is what continuing to water and take care of the corn past early dent will add.

Corn harvest will begin on many farms as soon as black layer forms. Then it will be dried and stored or sold. This year we’ve seen drought and stink bug damage affecting edges of fields, especially. We could have a possibility of aflatoxin in affected areas. Early harvest (before it reaches 20%) and LP Gas drying corn will help. We also need to segregate corn that didn’t get adequate moisture during the season. Dry corners and in some fields where the corn is very short under the end gun, needs to be separated from the quality corn. In some cases just mowing droughty corn down before harvest will be needed to keep the combine away from it. Remember those spots when it’s dove shoot time.

Corn prices are on the rise which is great news and has some folks continuing to plant corn now and considering planting irigated corn after corn this year in July.  Corn planted very late is risky and will yield lower of course and have some other problems, but may be profitable. Usually we get about a half yield, so 100 bushels per acre or so but sometimes more. We start off with long hot days and end up with short cool days.

Normal corn maturity is in about 120 days but late corn can be ready in 90 days or so. Corn needs about 2700 heat units to make and that’s the difference. I did a study at our Donalsonville, Seminole county weather station for the past 5 years and we see from July 20 to Oct 31 you get real close to that heat unit accumulation to get corn mature. A problem can be getting corn to the final phase and ready for harvest as the days are short and can be cool. It will likely need to be dried after harvest.  If we have warmer weather in the fall that really helps.

Everything moves fast with a late crop so we need to have fertilizer and herbicide out early and start watering harder, earlier. We want to grow the best plant we can early for the best yield. Often we have short, less beefy corn that’s planted very late.

Variety selection is important as a disease and insect resistant hybrid will be needed as insects and diseases are worse. NCLB and SCLB resistance is a must and we’ll still have to spray fungicides several times. Any Bt hybrid with the Vip3A gene, Syngenta Viptera, Pioneer Leptra, or Dekalb Trecepta.  On your seed at least the 500 level seed treatment such as Avicta complete or Poncho Vitivo would be good.  Some have used tropical corns but it can be hard to get them dried down in time but would be good for silage.

We would plant less seed, maybe 26,000. And we may need to plow out volunteer corn if planted right after corn. Directed herbicide may help as well as planting a Liberty resistant hybrid after a nonresistant one but most are resistant to glyphosate and Liberty now and it doesn’t work that well anyway.

In furrow insecticides/nematicides will help. Stinkbugs will likely have to be sprayed at least once.

We wouldn’t need as much fertilizer as our yield goal is less, maybe fertilize for 140 Bushels. But we do need to quickly sidedress. Pop up will help as we may have a lot of organic matter breaking down around the roots. Maybe a third 10-34-0 and the rest nitrogen since we aren’t facing the cool season Phosphorus need.

Southern rust already here so start fungicides by V8, maybe earlier, scouting is important, ( combo fungicides best). Disease can be a big problem in late corn and will require frequent sprays. Early sprays by a ground rig will work, and then move to the airplane.

Corn after corn is risky business but has worked for some folks especially in deep south Georgia especially if you have on-farm drying and good irrigation.

White Sugarcane Aphid is bad this week in Grain Sorghum. Dr Buntin reports it across the state. He reports that “Sivanto prime is labeled and we got the Section 18 again this year for Transform WG (attached).   We also got a Section 18 for Sivanto prime for use on sweet sorghum.  Transform cannot be used on sweet sorghum for syrup production.”  Lorsban will give some control. Photo I took this week with a Syrphid fly larvae getting fat eating aphids. 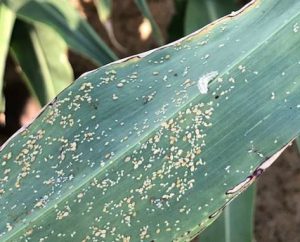