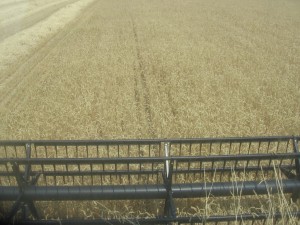 The following information is provided to understand the differences in each of the varieties that are recommended in Georgia.

AGS 2060 is one of a handful of early maturing varieties with excellent yield potential. It has very good leaf and stripe rust resistance and very good Hessian fly resistance and test weight but is susceptible to powdery mildew. It has a short vernalization requirement and matures earlier than most. It will lodge with high N rates.

AGS 2038 is a new high yielding variety that has excellent disease resistance and yield. It’s straw strength is better than 2060 and 2026, but it is moderately resistant to Hessian fly.

AGS 2035 is a variety that was developed by the University of Georgia and has good leaf and stripe rust resistance, good test weight and yield, moderate Hessian fly resistance but is susceptible to powdery mildew. It is medium maturing with good soil borne virus resistance.

USG 3555 yields similar to AGS lines. It has a longer vernalization requirement than most. It is susceptible to leaf rust and hessian fly but has good yield and straw strength.

Oglethorpe has above average yield in both north and south Georgia. It has good resistance to leaf and stripe rust but only fair tolerance to powdery mildew. This variety has Biotype L Hessian fly resistance. Care should be taken with nitrogen applications as it only has fair straw strength.

9171 is a shorter statured wheat with good disease resistance, but it is susceptible to hessian fly. Due to its longer vernalization requirement, it is recommended for the Piedmont and Mountain areas of Georgia.

Southern States (SS) 8641 is a good yielding wheat with excellent disease and Hessian fly resistance. It has good straw strength and test weight. It matures later than most varieties and should not be planted past the recommended planting window in Georgia.

Fleming is the earliest maturing wheat in Georgia. It has very little vernalization requirement and, therefore, should be planted in the later ¼ portion of the recommended planting period. In late plantings in Georgia (after recommended planting periods), Fleming provides some of the highest yields of all the varieties tested. Caution: Fleming has a physiological spotting that is easily mistaken for leaf disease. All lesions should be carefully examined to make sure a proper diagnosis is made when considering a fungicide.

Jamestown is a variety with good yield but moderate susceptible to leaf rust, good resistance to powdery mildew and stripe rust. It is susceptible to Hessian fly. It is recommended that this variety be treated with an at-plant insecticide.

Roberts is one of the oldest public varieties still recommended however it is recommended for forage production only. It has good resistance to glume blotch but is susceptible to all other foliar diseases and requires a fungicide for adequate seed production. It is a late maturing variety that has a long vernalization requirement.

LA754 is an early maturing wheat with a short vernalization requirement that has good leaf and rust stripe rust resistance. It is moderately resistant to hessian fly. It should be planted in the later portion of your recommended time period, for the Coastal Plains region.

TV8525, TV8535, TV8448, and TV8861 have vernalization requirements that are best suited for the Piedmont and Mountain areas of Georgia. Please see the variety characteristics for pest ratings.

Arcadia is an early maturing, short vernalization wheat, that has good leaf rust resistance and good straw strength. It is susceptible to hessian fly, powdery mildew and stripe rust.

November 15 – December 1 are the best planting dates for our area. Planting date is a critical component of successful wheat production. Planting too early or too late reduces yield potential. Always plant late maturing varieties first since these varieties most often have the longest vernalization requirements. Recognize though that some medium maturing varieties may also have long vernalization requirements which makes them less suitable for late planting.

Vernalization requirement varies widely with variety. In order for wheat to vernalize, temperatures must be low and remain that way for a specific length of time. In the absence of cold weather wheat waits until enough heat units are accumulated before heading. This delay in heading usually results in wheat filling the grain during a hot and dry time of the year such as May or early June.

If planting late in the season, choose an early maturing variety because they have, in general, very little vernalization requirements. This ensures the crop will vernalize properly even in a mild or warm winter. Caution should be taken to avoid planting these types of varieties too early in the season. Due to their short season growing abilities, these varieties may enter the jointing and heading phase too quickly and therefore be subject to severe winter kill or damage from late spring freezes.

In fact, varieties with very short vernalization requirements such as Fleming etc., on average perform best when planted between December 1 and December 15th. In this case, the recommended planting dates are two weeks later than the recommended dates for most other varieties.

The optimum window for wheat planting in Georgia is typically one week before the average first frost date for a given area and one week after. Planting during the appropriate time for your area will allow wheat to develop enough tillers prior to January or early February which reduces thelikelihood of needing to apply two applications of N fertilizer in the spring. Fall produced tillers will have stronger root systems, larger heads with better capacity for high test weight and consequently, tolerate more stress.

In a normal year, wheat cultivars vary between 10,000 and 18,000 seeds per pound. This difference can impact the actual seeding rate if a grower seeds wheat in bushels per acre. For example, seeds per pound of variety A and variety B vary by 35%. If a grower planted in bushels per acre, he would plant 35% more seed of variety A than variety B, potentially over-planting or under-planting one of the cultivars. For that reason, it is important to focus attention on purchasing the amount of wheat for seeding not by bushels but ultimately that needed to give you the 30 to 35 seeds per square feet. 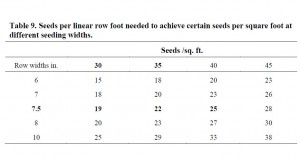 Nitrogen rates and timing of application are key management factors for making good wheat yields. Nitrogen rates should be based on soil potential, cultivar, realistic yield goal, previous crop and residual N. For expected wheat yields of 40 to 70 bushels per acre, use a total N rate of 80 to 100 pounds per acre. Higher yields will likely require rates of 100 to 130 lbs per acre or more.

Apply nitrogen in the fall is critical to encourage good tiller production prior to the onset of winter. Adjust this rate based on the preceding crop. In general, apply N (based on the previous crop rotation) as follows:

Tillers produced in the fall generally produce the most grain per unit area. It is important though, not to over-fertilize with nitrogen in the fall as it may cause excessive growth and result in winter injury.

Timing of N fertilization should be based on the pattern of uptake by the crop. Demand for N is relatively low in the fall but increases rapidly in the spring just prior to stem elongation. Therefore, make the fall applications of nitrogen at planting, and the remaining N prior to stem elongation (Zadoks 30). Use the lower rate of fall applied nitrogen at planting on heavier-textured soils and the higher rate on sandy soils.

When the wheat crop reaches the growth stage Zadoks GS 25, begin counting tillers to determine the need for additional nitrogen applications for the proper tiller production prior to the onset of stem elongation. This stage of growth generally occurs during the mid to later week of January in south GA.

If the tiller counts (a stem with at least three leaves) are low, 80 tillers per square foot or less, nitrogen applications at this time are critical for improving the yield potential of the crop. Some nitrogen will still be needed to maximize the yield potential if the tiller counts are lower than 100. If the tiller count exceeds 100 or more per square foot at Zadoks GS 25, then apply all remaining nitrogen at or just before GS 30 (stem elongation). Usually Zadoks GS 30 (or Feekes 5) occurs during early to mid-February in the southern half of Georgia. 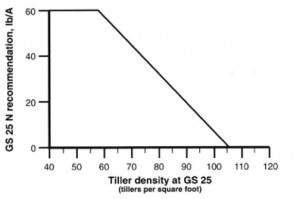 Since 65% of the total P uptake and 90% of the total K uptake occurs before the boot stage, these nutrients should be applied according to soil test before planting and thoroughly incorporated into the rooting zone. When double cropping after wheat, apply P and K for fall and spring crops prior to fall planting, except on deep sands. In this case, split K applications between the fall and spring crops.

Sulfur (S) leaches readily in sandy soil horizons, but accumulates in subsoil clay horizons. If the depth to clay is greater than 16 inches, apply at least 10 pounds of S per acre. Best results are obtained when S is supplied with topdress N applications.